Norway has a long coastline with clean and nutrient-rich seawater, which provides ideal conditions for the cultivation of kelp.

To ensure a long-term and profitable industry, kelp cultivation must be developed in a sustainable way with an understanding of possible impacts on the marine environment.

The research project KELPPRO (2017-2020) investigated how cultivation of kelp impacts the environmental conditions and marine life on the seafloor and in the open water masses, and it assessed whether kelp farms play a role in spreading alien or endangered species.

This report summarizes the main results and establishes a knowledge base for sustainable management of the
industry.

The report is in Norwegian, with an English summary.

Congratulations to our KELPPRO graduates!

We are pleased to announce that our students Lars Andreas Holm Grünfeld, Emma Hald Boldreel and Ragnhild Ryther Grimm Torstensen have completed their master's degree!

While Lars Andreas and Ragnhild have studied the role of kelp cultivation facilities of Alaria esculenta (badderlocks/winged kelp) and Saccharina latissimia (sugar kelp) as "artificial forests”, Emma has considered benthic degradation dynamics of deposits from the two kelp species. 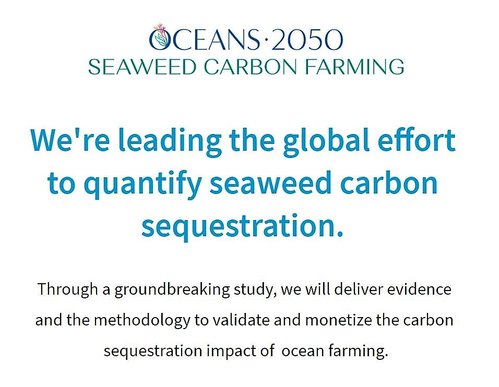 The objectives of the final workshop were to present the main outcomes of the KELPPRO project including providing guidance for decision makers and management authorities involved in kelp cultivation.

Click HERE for meeting notes and see the presentations HERE

The KELPPRO network will be collaborating with Oceans 2050 in the Seaweed Carbon Farming Project. The project is lead by world-renowned marine biologist Dr. Carlos Duarte and is an

international study that will help restore abundance to the world’s ocean while advancing climate restoration through seaweed aquaculture.

Through this project, Oceans 2050 seeks to promote the expansion of kelp farming by leading the scientific study needed to harness the economic incentives of the carbon offset market and drive environmental restoration. To achieve this, Duarte has engaged a network of leading seaweed scientists and farmers from 12 countries around the world, spanning five continents. KELPPRO and its network is happy to be among these!

Read more about the project here:

Alexandra Cousteau Wants To Restore The Oceans By 2050

October 2020: Status report for KELPPRO to The Research Council of Norway 2020

The KELPPRO project started in January 2017, and the following is a short status report of the fourth and final year of the project period, from October 2019 to October 2020.

The fourth year of KELPPRO overall has gone according to the plan, the project description, and the approved project contract, except for some delays in data analyses and publishing of results due to covid-19. 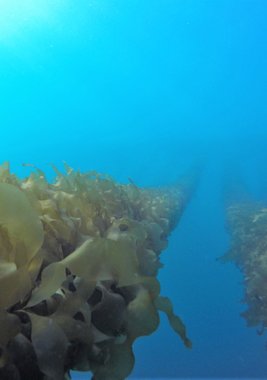 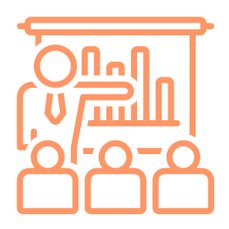 KELPPRO is running for its last year, and we have scheduled the final workshop to take place: 24-25 November 2020. There will be a science focus on 24/11 and a management focus on 25/11 (translating the science to management and policy makers). Agenda and venue place to come.

Please reserved the dates. It would be wonderful if you have the opportunity to participate and join the discussion on the KELPPRO results, and contributing to draft the way forward.

Many organizations have stated their support, including NIVA. What we have in common, as it says on the manifesto web site, is that we «believe in the potential of the seaweed industry, and that we share the vision for an upscaled, responsible and restorative seaweed industry». 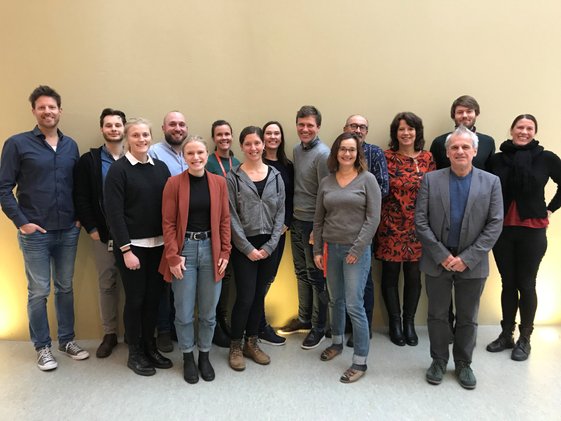 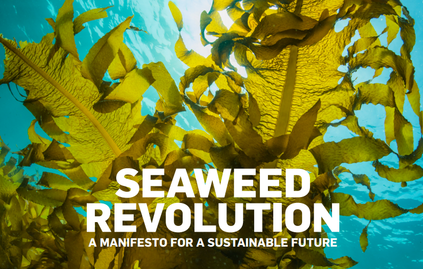 Most WP leads and key scientific personnel was present during the meeting, including one industry partner from Seaweed Energy Solutions (SES).

After checking out the conditions in April (just before harvesting of the kelp in the farm), the team set out on a new trip in September, and this time after harvesting. Species of invertebrates and fish were collected in order to see if the species composition found in the farm is associated to the kelp growing there or if it’s just an effect of the infrastructure of ropes, lines and  buoys (covering an area of approx. 250 x 300 m).

with the results from WP4 work so far 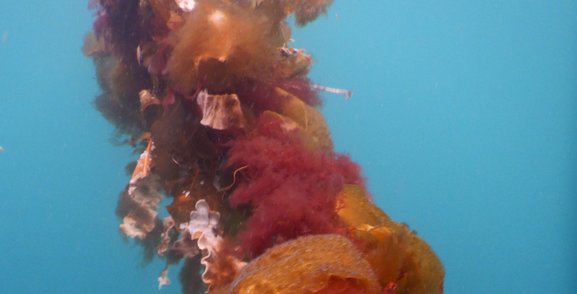 A workshop in Nordic Blue Carbon Ecosystems (BCE) was held in Copenhagen.

Nordic Blue Carbon is a collaboration between the Blue Carbon Initiative (BCI) and the key experts on Blue Carbon in the Nordic countries.The workshops aim was to discuss the ocean forests potential to store CO2 and how it can mitigate climate change.

The KELPPRO project was represented by the Chief himself, Kasper Hancke: 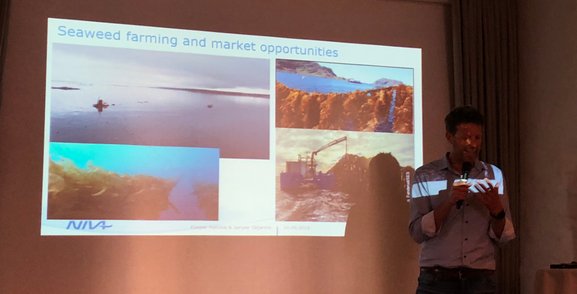 Aqua Nor is an nternational meeting place for the aquaculture industry in Trondheim.

The KELPPRO project was represented at the Aqua Nor conference and a presentation was given about the positive and negative impacts of industrial-scaled kelp farming on coastal environments.

The green shift in the sea - How to make room for a large kelp industry?

Seminar held by The Bellona Foundation.

Ole Jacob Broch (SINTEF) and Kasper Hancke (NIVA) from the KELPPRO team were invited to the seminar to talk about the potential of industrial kelp farming and the impacts on coastal environments. 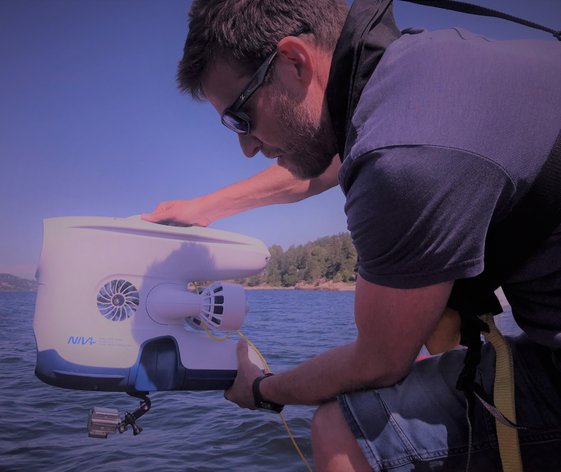 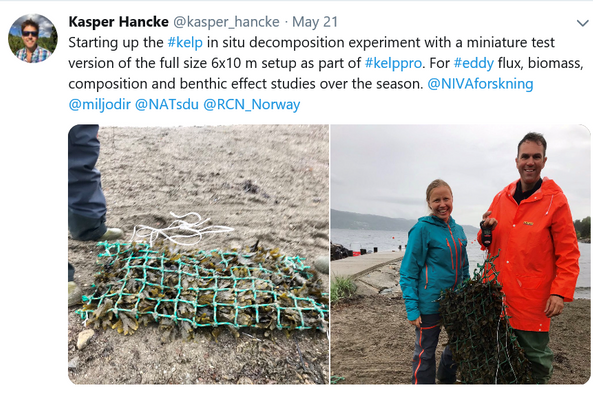 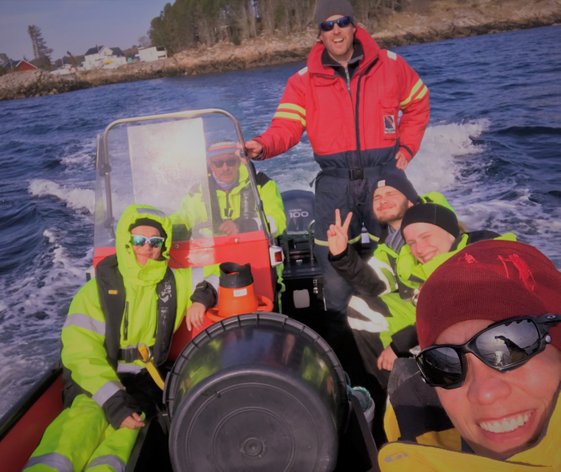 This workpackage focuses on the effect on kelp farms on the marine benthic ecosystems, including question like: will the kelp farm have a function as an “artificial” kelp forest.

Four scientists (Kasper Hancke, Eli Rinde, Hartvig Christie and Trine Bekkby) and two Master students headed off to Frøya collecting kelp and associated animals in a kelp farm (before harvesting) and sourrounding natural kelp forests. In order to see if the farmed kelp has any similarities with the natural kelp, animals were collected both in Saccharina latissima and Alaria esculents forests (as both these species are grown in the farm). Fauna associated with S. latissima seeded out at different times in the farm was also collected.

Animals were also collected in the Laminaria hyperborea kelp forests growing adjacent to the farm to see if the farmed kelp associated fauna was more similar to this species of kelp, growing just outside the farm, or if the farm has a kelp species specific fauna. Fauna traps were put out in the water masses as a control. In addition to fauna traps, fish were collected in both the farm, the natural kelp forests and in the water masses. Individual kelps from both the farm and the natural kelp forests were measured and weighed and epiphytic algae brought back to the lab.

The new Blueeye ROV has arrived and it has been given the name DORY! The name fits well with the ROVs skills and visuals as Dory is fast, energetic, curious, blue (and yellow?) and looking out for adventures, but also impulsive and short-minded never remembering where she has just been… 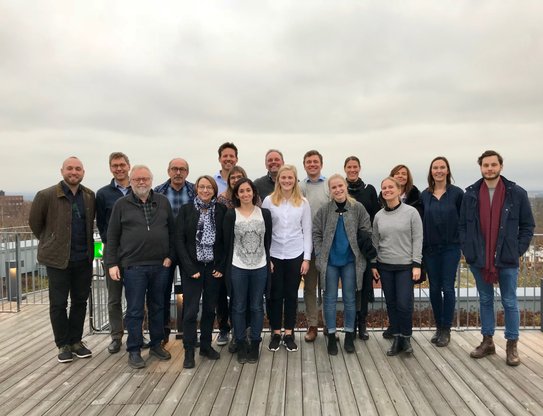 The first KELPPRO annual meeting was held in november. Participants from all partners were presented in addtion to representatives from the Norwegian Environment Agency and the Norwegian Directorate of Fisheries, among other. 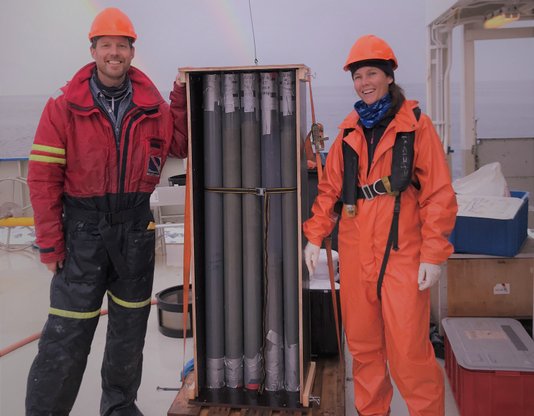 In October a WP2 cruise in Frohavet and Frøya was conducted on board NTNU's research vessel, R/V Gunnerus. Kasper Hancke and Gunhild Borgersen from NIVA were responsible for collecting benthic fauna and sediments and they can confirm that the old saying is true: there is a pot of gold (or at least some pretty nice core samples) at the end of the rainbow!